Has the Japanese Whaling Fleet Surrendered?

I’ve never written about this here but I have been following this campaign for many years and I have been acquainted with a number of people who have volunteered for the Sea Shepherd Conservation Society over those years. Of all of the anti-whaling groups out there they are the most effective but also the most controversial. They operate in international waters against a fleet of Japanese whalers who are illegally hunting in a whale sanctuary near Antarctica. Their actions have been chronicled in the popular Whale Wars series on Animal Planet.

I recently met several dedicated employees and Captain Chuck Swift of the Bob Barker, a ship named after the game show host who donated the funds to buy it, while traveling with my friend Mike Mease of the Buffalo Field Campaign and his stories were amazing. These people really put their lives at risk to save wildlife from unsustainable harvest. Chuck gave me a hoody sweatshirt that I wear with pride.

While this may be a short lived victory it is sweet nonetheless. I commend them for their dedication.

Who knows? If there is a conviction in this case, it might solidify my theory that anti-wolf advocates are behind the decimation of elk herds 😉

Recall, Rex Rammel is the politician who joked about “Obama tags“. He also had a run in with then Governor and now Senator Jim Risch after his canned hunt elk escaped and were shot by Idaho Fish and Game agents.

We’ve written about him here before.

Rex Rammell vs. the Elk vs. the Law
Boise Weekly

– – – – –
Addition by Ralph Maughan. So this Karen Calisterio in North Idaho who just had a “scary,” but completely unverified encounter with wolves on her property was Rex Rammell’s campaign manager.

Big Energy companies with criminal records given billions in stimulus funds to wreak havoc on our public lands and wildlife.

The Center for Public Integrity has issued a stinging report on how the Obama Administration has bypassed the National Environmental Policy Act (NEPA) when issuing permits for energy and other projects which involve federal lands or funds. Over and over we have seen that projects are rushed through without any public oversight and in areas where they have severe environmental impacts. Wind farms on public lands without analysis of their impacts on bats, sage grouse, pygmy rabbits, and other wildlife; solar plants on public lands without sufficient analysis on endangered desert tortoise and other imperiled wildlife; power lines and other utilities permitted outside of established corridors without analysis of impacts on wildlife; offshore oil rigs in deep water without proper understanding of how to deal with catastrophic failures. All of these uses are being given a pass under NEPA. 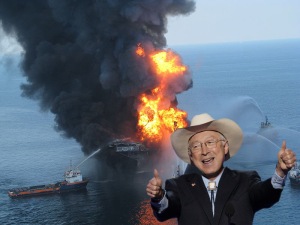 What is the problem with this you might ask. Well, I’m sure you remember what happened in the Gulf of Mexico this summer. The Deepwater Horizon was permitted under a categorical exclusion.

In contrast livestock grazing permits are not even renewed under categorical exclusions, they require at least an Environmental Assessment that must undergo public review and can be appealed, in fact I do it all of the time.

These projects also only benefit those with existing power and money while projects, such as rooftop solar and energy efficiency improvements on existing structures which would benefit real people and not come at the expense of irreplaceable wildlife and land resources, are being forgone. It’s all about keeping the wealthy in control of our resources at the public expense.

What is next? Well in Nevada, the scourge of ranchers and water mining entities like the Southern Nevada Water Authority, ancient forests made up of old growth pinyon pine and junipers are being eyed by the energy companies as a source of biomass to fuel turbines. More on that later.

Madison Valley most successful.  Number of deer killed down slightly-

All the articles say it was the great weather for bringing the elk down where they could be more easily found.  However, I thought wolves had nearly destroyed the elk herds.  I guess good weather can actually perform a resurrection (or show what bullshit the wolves-have-killed-everything is).

Talk about burying the lead, it appears that Secretary of Interior Ken Salazar would back efforts to gut the Endangered Species Act.

Ken Salazar met with the governors of Idaho, Montana, and Wyoming yesterday and, while Wyoming remains intransigent on the wolf issue, he appears to have sent the message that he supports a legislative gutting of the ESA.

“If Interior officials can’t reach an agreement with Wyoming, Schweitzer said Salazar had pledged to back Idaho and Montana in their efforts before Congress.”

Spring Valley is a miraculous place, renowned for its magnificent skies and as critical habitat for sagebrush obligate species such as sage grouse and pygmy rabbit.

Unfortunately, like so many obscure public places around the west, the innumerable environmental values Spring Valley harbors are under threat, ironically by so-called “green energy” projects.

END_OF_DOCUMENT_TOKEN_TO_BE_REPLACED

The New York Times Weighs in on the wolf issue.

The New York Times doesn’t like the proposed legislation which would remove protections from wolves either.

Either [bill] would set a terrible precedent, opening the door for special-interest groups to push other inconvenient species off the list. The bills would undercut one of the primary reasons for the act, which was to relieve Congress of the impossible task of legislating protections species by species and leave the final determination to scientists and wildlife management professionals.