Oil companies have colluded with the Idaho’s and Montana’s governors so they can make even more profits than if they built the machinery for the toxic Alberta tar sands mining in Canada.

Strange May blazes burn a third of Slave Lake, Alberta, and threaten to cook the tar sands area-

It’s only mid-May, and it still struggles to get much above 60 degrees here in Eastern Idaho, but forest fires are torching northern Alberta, not all that far from the Arctic Circle. A third of the town of 7000 at Slave Lake burned.  In the general area, many of the giant tar sand pits have been evacuated.  This is near Ft. McMurray.  Temperatures have been in the high 70s and 80s.

Other fires continue to burn across northern Alberta.   By Ryan Cormier, Edmonton Journal.

Fate of ExxonMobil megaloads at stake in Boise hearings

Residents on Highway 12 and recreation businesses are rallying against the megaloads.

Fate of ExxonMobil megaloads at stake in Boise hearings. By John Miller. AP in the Missoulian.

This is good news, although likely temporary.

The turnouts constructed on the Montana side of Lolo Pass appear to be larger than the oil giant said and closer to Lolo Creek which already suffers from highway runoff.

Judge stops construction of big-rig turnouts in western Montana.  By Kim Briggeman of the Missoulian

Megaloads have no place in Idaho

Megaloads have no place in Idaho. By Bill Sedivy. Idaho Statesman.

Montana Wildlife Federation is going to sue over the oil megaloads

Idaho landowners and conservationists to get help from Montana allies-

Exxon is now getting ready to test taking the megaloads up Highway 12 and through Montana. There could be as many as 200 gigantic loads from Exxon sent to Alberta. Some, however, are being broken down into smaller loads so they don’t have to travel on beautiful Highway 12.

– – – – – –
Here is some good news on the struggle fighting the tar sand oil. Ottawa fights EU’s dirty fuel label on oil sands. Climate Connections. The EU is going to label it as a dirty fuel.

Update on the oil megaloads on Highway 12

One megaload reaches Lolo; one stuck on Highway 12-

We haven’t covered this for a while, but as many predicted the movement is not going smoothly.

Oil company megaloads to stay at port in Lewiston for Christmas

Hearing officer does not issue a decision on the international oil company megaloads sitting at the Port of Lewiston, Idaho. Decision will be coming out at an undefined future date.

No ruling before Christmas on megaloads. Lewiston (ID) Tribune on-line

Imagine you live on Highway12 and have a medical emergency. It’s night. If you can get to Lewiston or Orofino for care, you will live. Your spouse gets you into the pickup and pulls out onto Highway12, but a giant oil rig from Korea or China blocks the entire highway including the borrow pit.

An American family, now reduced to the status of peasants, has their father or mother die as international oil plows its way to Albertan tar sand pits.

Hearing officer limits testimony he will consider to small matters-

The much awaited hearing on giant oil machinery on Highway 12 was held today in Boise. It sounds like the Idaho Dept. of Transportation hearing officer will oil the way for the movement of the giant oil modules.

The hearing officer said he would only consider the first 4 modules, not the hundreds more to follow. The first 4 go to the Billings, Montana refinery, not Alberta’s tar sand pits.

The oil company said the plaintiffs, 4 citizens along Highway 12, lack standing to because they weren’t singled out — the transport won’t affect them to any greater extent than other citizens along the highway. Happily for Conoco, the hearing officer also said he would limit his review to whether foes have a right to get involved at this stage of the process.”

Boise Weekly has a story giving more of the color of the hearing. Overflow Hearing on Oversized Loads. By George Prentice.

Public input is required, but conditional permits are issued-

Advocates for the West won a brief victory Friday on behalf of local residents of Highway 12. These temporarily block the first 4 shipments (which go to Billings not Canada). They are for ConocoPhillips. Later ExxonMobil seeks to move over 200 giant shipments over the highway, which parallels the Clearwater and Lochsa Rivers, over Lolo Pass and through Montana to Alberta.

“Each of the Exxon loads would weigh 300 tons, stretch 227 feet long, reach 27 feet high and 29 feet in width – wide enough to take up both lanes of the highway. Trucks would move only at night and pull over in newly designed turnouts during the day.” Read more of this AP story by Todd Dvorak.

It has been discovered that oil companies plan to use scenic, narrow Highway 12 for at least a decade for hauling giant equipment, so this will be a continuing issue if big oil wins.

This is not an immediate go ahead for the oil companies to move up Highway 12, but hopes for a quick kill of the oil juggernaut are gone.

Update: I understand that this decision might allow the movement of 4 large coke drums up Highway 12. These are bound for Billings, not Alberta. Winter will soon be closing in, making movement soon before transportation becomes too difficult in the winter.

Leading the fight against the international dirty oil consortium is the Idaho public interest law firm, Advocates for the West.

There is a good update and analysis of the ruling in New West. Latest Ruling on Big Rigs and Highway 12 Not About Merits of the Case. The majority opinion for the Nov. 1 Idaho Supreme Court ruling cites jurisdiction questions in its overruling a lower-court decision in August that stopped the transport. By Steve Bunk, 11-02-10

It seems to me that this will not be a one time event because the passage of this huge equipment through north central Idaho and then Montana will be ongoing for many years.

The Missoulian reports that a subsidiary of the national oil company of Korea now wants to use scenic U.S. Highway 12 through north central Idaho and over Lolo Pass to transport numerous giant oil (tar sands) equipment to Alberta.

Despite worthless assurances about this kind of activity being a one time thing, it’s plainly obvious that as predicted the oil companies mean to make the highway along this asphalt ribbon through the wilderness an equipment hauling route.

This will slowly ruin the lives to downstream residents who have to endure these highway blockages, disrupt traffic into Montana, harm the Lochsa, and Middle Fork of the Clearwater River, and make recreational and timber cutting access into the surrounding mountains slow and difficult by requiring long alternative routes.

While Highway 12 through Idaho is just a 2-line highway, its improvement over the years (a gravel road until the 1960s) has long disrupted the lives of people. In the past it was Montana. A number of abandoned Eastern Montana towns came to their end as transport of their grain changed from the railroads to trucks going in the opposite direction down Highway 12.

Even before the big oil modules, the river has been greatly threatened. This happened just before the big Idaho Supreme Court hearing on the judge’s order stopping the oil module transport-

Tanker crashes and spills fuel along US Highway 12. Associated Press

Will this possible disaster (the oil hasn’t yet run into the river) influence the Idaho Supreme Court’s decision whether to overturn the injunction by 2nd District Judge John Bradbury to halt the oversized loads of massive tar sands equipment bound for Alberta?

Mutant fish lead to calls for Ottawa to monitor oil sands. Bob Weber. Edmonton — The Canadian Press. “The fish are hard to look at.”

Highway 12 winds along between these two national forests.

Put the brakes on massive trucks on the U.S. 12 corridor in N. Idaho

Butch Otter thinks this is the way to perk up Idaho’s feeble economy. Is closing down Highway 12 the way to do it?

Am I going to visit the Selway, Lochsa, or Lolo this year? Not to spend a day stuck behind oil equipment moving at 5 mph.
– – – –
More on July 26. Idaho, Montana Groups Challenge Oil Equipment Transport. By Associated Press.

As oil gushes in Gulf, eyes are on sands to north in Alberta

Tar sands said to be solution from reliance on “petro-dictators”-

Of course, this is all at the cost of another huge insult to the planet as well as the northern Rockies.

One of the things that few seem to understand is that the worst environmental degradation comes from exploiting marginal (actually submarginal) resources. Drilling in deep water, polar regions, and production of energy from sources where net energy (actual new energy) is relatively small such as tar sands, show a very depleted resource and a horrible future.

As oil gushes in Gulf, eyes are on sands to north in Alberta. By Kim Briggeman of the Missoulian

Posted in oil and gas. Tags: Alberta, Idaho, Montana, net energy, tar sands. Comments Off on As oil gushes in Gulf, eyes are on sands to north in Alberta

It’s bad news for Idaho and Montana highways, but much more for Montana the world at large.

Over 200 trips of these giant oil equipment pieces to go through U.S. 12 in Idaho and NW Montana- 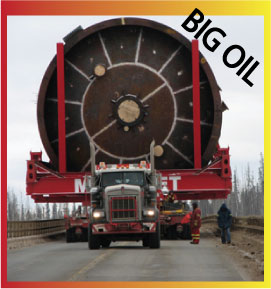 I think perhaps there has been too much attention in this forum on elk in Lolo.  Elk are important, but fishing, scenery, wilderness, and property of local people are more important. U.S.Highway 12 is one of Idaho’s most scenic highways. It goes through scenic canyon and between wild country following the Clearwater River, then the Lochsa River up and over Lolo Pass into Montana.

The exploitation of Alberta’s tar sands are well known as perhaps the single most environmentally destructive project on the planet (at least until the Deepwater Horizon blowout in the Gulf of Mexico). Now that destruction has spread to Idaho and Montana with these massive loads which require “improving” Highway 12 and other highways in Montana.

Some of the good folks in Missoula are fed up with oil company damages and protested. Protest rally. By Rob Chaney. Missoulian.

We will be following this more from now on.

Conservation deal for Canadian forest the size of Texas-

Although the first article below has a somewhat pessimistic tone, this certainly seems better than the current trend in boreal Canada. There is more value to the vast boreal forest than caribou.

-The deal might also retard global warming because this generally wet (boggy) forest contains huge amounts of the much more potent methane* gas that could be released into the atmosphere.  Timber companies agree on conservation plan for Canadian forests. Christian Science Monitor. By Pete Spotts, Staff writer

This pact will not stop the biggest threat in the area, the open pit mining of “tar sands,” conversion of which into synthetic oil is tremendously polluting and has relatively poor net energy efficiency.

Because of its tremendous environmental impacts and poor quality energy (little to no net energy is produced), I haven’t considered oil shale/tar sands mining much of an environmental threat in the desert of Utah. I suppose most others have felt the way.  As RL Miller says in his article below, a tar sands project has been “flying under the radar.”  Without more of a public uproar it will soon break ground near the national parks of Eastern Utah.

What an outrage!  This kind of thing needs to be killed dead and a stake driven through its heart. The tar sand mining in Alberta has been called the single most destructive energy project on the planet.

Yes it produces oil, but also more negative externalities (environmental and other damage) than any other on-going project on the planet, according to an Canadian environmental group.

Environmentalists’ report to call for Ottawa to act on oil sands. By Bill Curry. The Globe and Mail