Folks continue to have plenty to say-

Here is the story on the coming third week of testimony, from the Spokesman-Review.

It seems to me that local folks willing to testify are mostly unhappy.  Here is a detailed story about past testimony in New West. New Idaho Megaloads Hearings Address More Than 200 Shipments. By Steve Bunk.

Despite efforts by the Idaho legislature to prevent people from suing over the plans of the lovable oil companies, two new lawsuits on the issue were recently filed.  One is by the National Wildlife Federation, the Montana Environmental Information Center, the Montana chapter of the Sierra Club, and the Missoula County Commission against the Montana State Department of Transportation. The other is by Idaho Rivers United. IRU is against the Forest Service. The Lochsa River and a corridor 1/4 mile on either side is part of the National Wild and Scenic Rivers System, and most of it is public national forest land. In fact the Lochsa was one of very first rivers protected, but the Forest Services is just standing by while the road right-of-way is being heavily chopped up for the wide and long loads.

There hardly worse news for a small farm, village, residential, or wildlife area than a giant confined animal feeding operation is coming in. Can it be stopped? In almost every state, but Idaho especially, this happens again and again. Usually the CAFO, flush with money and support from its crony’s in the state legislature plows over local opposition, including local elected officials and everyone’s property rights
Occasionally local people win. That is too much for Idaho’s plutocracy. Now they have a “right to farm bill,” which is really just the opposite. Notice how the Idaho Statesman got the headline wrong in the article below? . . .  just as the CAFO’s supporters hoped it would. The AP writer told what is really going on, but the Statesman wrote the headline.

Note that this bill is being pushed in other states too, indicating it is a multi-state campaign supported by some rich interest like maybe the Koch Brothers.

Proponents are wrapping their arguments for passage around Idaho’s rich agricultural history. “Agriculture is a shining star in Idaho,” attorney Dan Steenson told lawmakers during a recent committee hearing on Denney’s bill. “Expansion is necessary for businesses to grow.”
It’s nice to hear these mega-operations called businesses and not farms. They are in fact industrial in scope, although they enjoy the benefits of being agricultural in nature. And they come with a price to nature, neighbors and taxpayers. Read the rest . . . New CAFO bills carry a stench.

This purchase seems to be a very good thing for conservation of the Montana landscape, but I’d bet this post will stir up a lot of debate about billionaires buying land (or maybe just about billionaires and why there are so many of them all of a sudden).

On the “open range” if you don’t want someone else’s cattle on your property, you have to fence them out!

Arizona is rethinking the fairness of this tradition.  So are people in other states.

If you hit a black cow in the middle of the night on a public highway, you are always to blame and will have to pay for the dead cow even as you pay for your spouse, friend or child’s funeral.

It took a long time, but Western Watersheds and Advocates for the West seem to have a final victory

As a note, I am pleased to have been a plaintiff for the National Wildlife Federation in fighting this Bush era effort to exclude the public from having influence in grazing decisions, improperly grant property rights to livestock grazers, including water rights. Ralph Maughan
Below is the celebratory news release from WWP

Utah anglers may have to buy access to streams

We discussed this earlier in brief as part of the comments on the Salt Lake City, Chevron oil pipe spill into Red Butte Creek and the Jordan River.

Utah anglers may have to buy access to streams. By Brandon Loomis. The Salt Lake Tribune

To hell with private property rights, to hell with wildlife, we must protect cattle that aren’t even here. 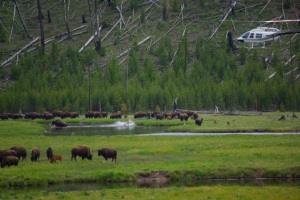 The ridiculous annual event of hazing bison during their calving season is underway even though this year the bison are likely to come back out of the Park because the green-up of grass hasn’t started there due to late season snowstorms.

Each year the residents of the West Yellowstone area have to endure this fiasco on behalf of a few ranchers who whine and cry that their cattle might get brucellosis from bison when they don’t even bring them to the area a until after the buffalo have all calved. This year, due to the late green-up, it will likely be even later.

On numerous occasions I have witnessed Montana’s helicopters chasing buffalo deep into the Park even beyond the border of Wyoming in front of bewildered tourists. Last year, while hazing herds of newborn calves and their mothers off of private property where there never will be cattle again, Buffalo Field Campaign filmed a calf that had broken its leg in the malay of the hazing operation. These kinds of incidents are a common occurrence and there is no justification for it.