“This is a very serious issue for Montana,” said Governor Schweitzer. “We need to discuss and act upon alternatives to what we are doing today. Our livestock industry is too important to let this disease dictate its future.”

Read the rest of the governor’s office news release:

Montana to capture 260-plus bison for slaughter tomorrow.

They haven’t found any reason why the cattle at Bridger, Montana turned up with brucellosis. They know it wasn’t bison. But, they can’t just let scientific investigation run its course. They have to kill something.

So tomorrow they will be rounding up the approximately 250 bison that keep leaving Yellowstone Park to feast on the lush grass to the west of the Park. Then they will send them off to slaughter.

Isn’t it fascinating how the livestock industry and gratuitous violence and domination are tied together. 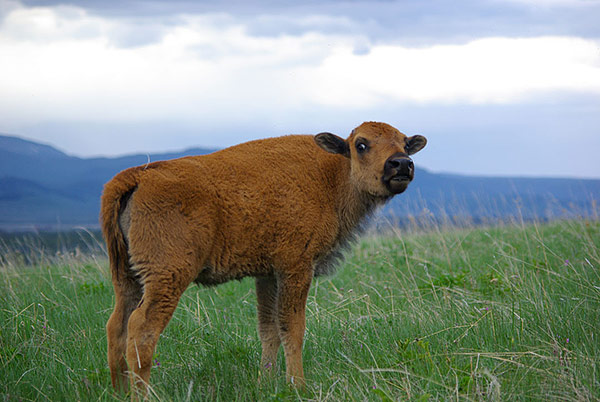 A wild bison calf on public land at Horse Butte, west of Yellowstone Park. The photo was taken Sunday. Of course this calf doesn’t know it will be Montana Dept. of Livestock buffaloburger in a couple days.

Here is the news release by the Buffalo Field Campaign

Department of Livestock to Capture and Slaughter Yellowstone Bison

WEST YELLOWSTONE, MONTANA. Montana Department of Livestock agents are currently erecting a bison trap near the West Yellowstone Airport, located just outside the western boundary of Yellowstone National Park. According to statements made by the agents and the Montana governor’s office, the state plans to capture and slaughter any bison in Montana starting as soon as tomorrow.

According to Bill Queen of the Hebgen Ranger District of the Gallatin National Forest, Forest Service lands and airport lands near the trap site will be closed to the public. However, members of the media and the public will be allowed to view operations from a nearby hillside.

There are approximately 250 bison grazing on National Forest lands in the area near the Madison River and Hebgen Reservoir. While the purported reason for the bison slaughter is to protect Montana’s livestock industry from the European livestock disease brucellosis, at no time of the year do cattle occupy these public lands. There has never been a documented brucellosis transmission from wild bison to livestock.

“Governor Schweitzer campaigned on promises of providing greater tolerance for bison in Montana,” said Dan Brister of the wild bison advocacy group Buffalo Field Campaign, “yet he bends to the irrational will of the Stockgrowers whenever they demand more dead bison. Since Governor Schweitzer has been in office, 1,177 Yellowstone bison have been killed.”

Brucellosis has been receiving great attention in the state since last week when seven members of a Bridger, MT cattle herd tested positive for antibodies to the disease. Because Yellowstone bison never came anywhere near these cattle, it is certain that they are not the source of infection and likely that cattle are responsible for the transmission.
END_OF_DOCUMENT_TOKEN_TO_BE_REPLACED

The article is written from the viewpoint of “predator management supervisor” Rod Merrell.

In the article Merrell keeps saying the coyotes are incredibly smart. That’s because we have spent 120 years making them that way with high human mortality driving natural selection for the smartest coyotes at avoiding getting killed by humans.

How important are sheep in Wyoming compared to the money generated by the energy industry there? Ten times less? A hundred times less? Maybe a thousand?