Decision will be appealed
513 bison at risk of being slaughtered

The decision will be appealed to the 9th Circuit.

Those that test positive for brucellosis exposure to be slaughtered

The slaughter of bison in Yellowstone has begun in earnest. Today Buffalo Field Campaign volunteers witnessed the capture of at least 300 buffalo in the Stephens Creek capture facility.

It appears that 13 of the bison captured were from the group of 25 allowed to leave the Park under a $3.3 million deal between conservation groups, the government, and the Church Universal and Triumphant. Those bison were captured and taken back to the Park on Friday and another one was shot because agents said she refused to go where they wanted her to. This leaves 10 out of the Park on those lands with another one whose whereabouts are unknown. The captured bison also probably include the 62 which were released from the Stephens Creek trap on Thursday.

This deal was touted as a “major breakthrough” by the groups who supported it but so far it has been an expensive fiasco.

Generally around 50% of bison test positive for exposure to brucellosis and Al Nash, spokesman for Yellowstone National Park, told the Buffalo Field Campaign that all of the bison that test positive for brucellosis exposure will be slaughtered. The test does not conclusively show that the bison actually have brucellosis and culture tests done in the past, which look for the actual bacteria rather than antibodies expressed by the buffalo, show that the rate of infection is actually much lower. 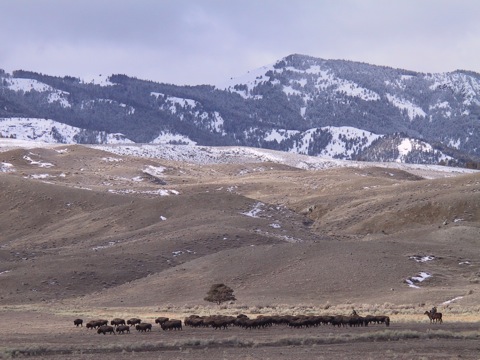 The snow is deep, in fact it’s 130% of average in Yellowstone this year. That makes for a bad situation if you are a buffalo there. Do you try to stay in the Park where you can’t get to the food that you know is under all of that snow or do you follow your instincts and move to lower elevation where there is less snow? Either way, you’re screwed if you’re a buffalo.

This year, with an estimated population of 3,900 buffalo in Yellowstone, things are reaching a tipping point and a mass exodus of buffalo is likely to ensue.

What will await them when they leave the Park? Well, this year, there have been over 100 bison killed outside the Park, mostly by tribal treaty and sport hunters according to the Buffalo Field Campaign (full disclosure, I am a long time volunteer and board member of BFC), one was hit on the road as a result of being orphaned during the hunt and unable to trudge through the deep snow on its own, and another one was shot by Montana officials after it left the Royal Teton Ranch after being captured, tested and marked in an obscenely expensive program which is vaunted by the government and “conservation” groups for its greater “tolerance” towards bison outside of Yellowstone National Park.

That experiment hasn’t gone too well. The buffalo aren’t behaving the way, or staying where the government wants them to so they have been chasing them around on horseback trying to keep them on the RTR.

END_OF_DOCUMENT_TOKEN_TO_BE_REPLACED

Articles about how the perennial saga of hazing, capturing, slaughtering, and hunting bison is starting once again in and around Yellowstone National Park. There is one change this year though that has left me scratching my head. This is the first year where bison leaving Yellowstone from the northern entrance of the Park near Gardiner, Montana are going to be allowed to use the Church Universal and Triumphant’s (CUT) Royal Teton Ranch (RTR) under an agreement with the National Park Service, Montana Department of Fish Wildlife and Parks, Greater Yellowstone Coalition, National Parks Conservation Association, and National Wildlife Federation.

The $3.3 million deal would initially allow 25 bison to use the RTR but only after they have been captured in the Stephens Creek capture facility just inside the Park boundary. They then would be subjected to squeeze chutes where they would have blood samples, fecal samples, taken from them and pregnant females would have vaginal transmitters placed in them so that biologists would be informed of the location where they give birth. Over time the deal might eventually allow up to 100 untested bison each year.

END_OF_DOCUMENT_TOKEN_TO_BE_REPLACED

Bison calf being processed at the Stephens Creek Facility YNP

“This RTR scheme increases harm and disrespect to buffalo, not tolerance,” said Stephany Seay, a spokesperson with Buffalo Field Campaign.  “It’s a new phase in how Yellowstone and Montana aim to treat wild bison like livestock.”

END_OF_DOCUMENT_TOKEN_TO_BE_REPLACED

The US Forest Service and the National Park Service are violating the law by not allowing bison the use of public lands. The grazing allotments provide the excuse the Montana Department of Livestock wants for their annual abuse of buffalo inside and outside of Yellowstone National Park.

Keep in mind, this issue has nothing to do with brucellosis, it is about political control of western lands and wildlife and about who gets to use the grass. It has always been about the noble landed elite showing the rest of us who is boss.

In the winter and spring of 2007-2008, the National Park Service “oversaw and carried out the slaughter of approximately 1,434 bison from (Yellowstone National Park), which represented approximately one third of the existing population of wild bison in the (Greater Yellowstone Ecosystem),” the group wrote in their complaint. “Such management, and ongoing commitment of NPS resources, severely restricts wild bison migrations, impacts their natural behaviors, maintains bison populations at artificially low numbers and negatively influences the evolutionary potential of bison as a wildlife species in the ecosystem.”

New World Mine claims all purchased

20 year threat of mining near Yellowstone National Park is over.

President Bill Clinton fought the mine and a settlement was reached in 1996 but the mining claims were still held by private interests. The Trust for Public Land has purchased the last of these claims and now the threat of the mines is finally gone.

The 1872 Mining Act needs to be changed so that mining companies cannot extort the American taxpayers or others by threatening to mine such sensitive areas.

Second Collision in a Week

Highway 191 is deadly to wildlife and a number of elk, wolves and bears have been hit along this stretch over the years. It is likely the most deadly stretch of road for wildlife anywhere in Yellowstone National Park. The stretch of highway 191 between Bozeman and Big Sky to the north is also the most deadly stretch of highway for motorists in Montana. I’ve been passed a few times on snowy roads where there was a double yellow line.  It pays to drive carefully on this highway. 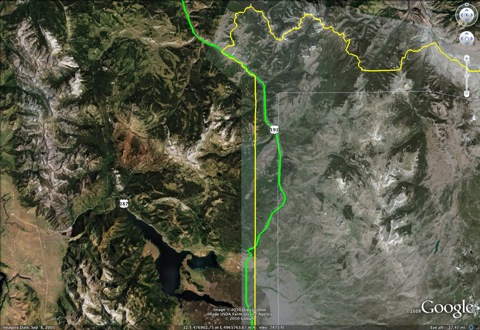 The only native trout in Yellowstone National Park are Yellowstone and Westslope Cutthroat, and Arctic Grayling. Over the years those species have been reduced in population due to competition, predation, and hybridization due to other introduced trout.

Lake trout, brown trout, and rainbow trout have become well established throughout the Park and now the Park Service is developing a Native Fish Conservation Plan which they hope will reduce their numbers and increase the numbers of native cutthroat and grayling. Right now the plan is in the scoping phase so you can find out more about it here: Native Fish Conservation Plan/EA Project Home Page