This is perhaps the first article I have read that offers a glimmer of hope for this rapidly disappearing tree, so vital to grizzly bears and Clark’s nutcrackers.

This is a replacement of the original article (it’s more complete). Grizzly numbers hit new high in Yellowstone region. By Matthew Brown. AP

Because of the late spring, just average berry crop, and failure of the whitebark pine nut crop (there will be no more successes), the record number of grizzlies (603) have been very hungry and have come into lots of contact with humans. The death toll of grizzlies is getting close to 50 just before hibernation.

Although federal grizzly bear managers have been sanguine about the the death of whitebark pine in the Greater Yellowstone ecosystem, the effect on the grizzlies is obvious in Wyoming. They have come down from the subalpine where the whitebark pine will never again have a good year. As federal bear managers predicted, the grizzlies have found food at lower elevations. They love bluegrass, but the trouble is cows are often standing in it.

Wyoming grizzly captures on record pace this year. Bears might be coming to lower elevations in search of food. By Cory Hatch, Jackson Hole, Wyo.

Cory Hatch’s story makes the low elevation grizzly’s presence sound like a puzzle, but I changed the head because the cause is obvious.

Losing the Whitebark Pine affects much more than grizzly bears

“We don’t know what’s going to happen without whitebark.”-

I know it will soon be functionally extinct, although no doubt some token remnants will be protected from beetles and blister rust. Ecologically speaking, it is already almost gone.

Here is a long essay on its demise and the effects. Feature article in New West. Grizzlies Only Scratch the Surface of What It Will Mean to Lose the Whitebark Pine.  The twisted, threatened symbol of high elevation connects an entire ecosystem. As one biologist puts it, “We don’t know what’s going to happen without whitebark.” By Shauna Stephenson. New West

Interesting post by NRDC’s Louisa Wilcox about how the science shows how critical whitebark pine nuts are for grizzlies and how the managers talk out of both sides of their mouth.

“In its August 9th legal brief challenging the 2009 ruling by Federal Judge Donald Molloy that required relisting of the Yellowstone grizzly bear under the Endangered Species Act, federal attorneys said, “the grizzly does not depend on whitebark pine for its survival. The grizzly is a very successful omnivore, and that…they will somehow be able to adapt to a decline in whitebark pines.” The legal briefs then go on to dismiss the issue of whitebark pine relationships to grizzly bear vital rates, including mortality risks, as well as the reproductive success of females. This argument, as the district court ruled, and I will discuss later, runs counter to the evidence on the record.

Then, just yesterday, the Interagency Grizzly Bear Study Team sent out a press release saying, “the scarcity of whitebark pine cones this year may be driving bears to find food at lower elevations, where there is more human activity, increasing the chances of bear-human interactions.” (This comes in a year when 22 grizzly bears are known to have died, and many human-bear conflicts have occurred — months before bears will den up.)”

Critical pine in grizzly nutrition is in steep decline. May get endangered listing-

Whitebark pine is in dire straights and it may well get on the endangered species list, but what then?  How do you save a tree so beset with disease and insect attacks with an ESA listing?

I have been doing a lot of backcountry traveling this summer, and while I have written numerous posts about pine beetle attacks, not just the whitebark pine, almost all Western pines are in serious trouble, mostly from insect attacks. Winters too warm are causing vast proliferation of the pine bark beetle, killing pine forests, especially the much more abundant lodgepole pine from the Yukon south to New Mexico.  In some places like northern Colorado, 95% of the lodgepole is now dead.  It seems to me that it will be a short time until most pines will be functionally extinct, even though some may persist in highly protected enclosures.

Spruce, Douglas fir, true firs, and other conifers are not under such attack, but the lodgepole is a huge component of the fish, wildlife, watershed and scenery of the Rocky Mountains. Like the whitebark pine, it is hard to think of any effective large scale human effort to conserve these forests.

Bark beetle infested mountain at Lower Slide Lake, WY. Although the mountain looks fairly green, most of the lodgepole on it are turning red. In two or three years the entire character of the mountains will be changed. Copyright Ralph Maughan July 19, 2010

The whitebark pine is a tree that lives at high elevations and was historically unaffected by pine beetles but due to global warming this has changed. Also, blister rust, an introduced fungal infection has taken a large toll on the trees.

The pine nuts of the trees are collected by squirrels and Clarke’s nutcrackers who’s caches are an important food source for grizzly bears. With their decline the bears are being affected too.

Fighting pine bark beetles is very expensive, but these giant, ancient trees have been determined to be worth it. Good news!

Anyone following this forum for a while knows the story of the plight of the whitebark pine. Now the Natural Resource Defense Council has sued to put in on the endangered species list. 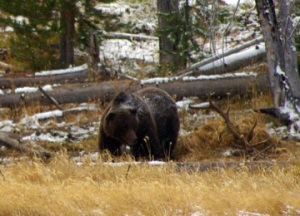 GYE grizzly bears go back on the threatened species list-

Molloy: Feds must restore protection for grizzly bears in Yellowstone National Park – By Matthew Brown. Associated Press. The successful plaintiff was the Greater Yellowstone Coalition. There is a second lawsuit filed in Idaho by a number of other conservation groups. It was assigned to Judge Lodge. No decision was been made by the court.

The headline in Brown’s story is misleading because the order to relist is not just for Yellowstone Park, but for the much larger area around the Park — the “greater” Yellowstone, and relisting’s effect for this area is where most of the controversy lies.

Grizzly Bears had remained on the list in the Northern Continental Divide Ecosystem and the Cabinet-Yaak (both in NW Montana). They have also remained on the list in the Selkirk (Northern Idaho and NE Washington state), the Selway-Bitterroot in central Idaho where there are no bears, and the North Cascades where there are a handful of bears up in northwest Washington against the B.C. border.  However, the grizzlies of Yellowstone and the adjacent area are the best known population in the lower 48.

END_OF_DOCUMENT_TOKEN_TO_BE_REPLACED

Although the majority of whitebark pine in the Greater Yellowstone has died off or burned in recent years, there are still enough for the grizzlies in those years when conditions are optimal for cone production.

There is a long and strong data set showing fewer grizzlies die in conflicts with humans during years of good whitebark seed production because the bears are at high altitude during the critical months when they are trying to put on winter fat and hunting season is taking place outside Grand Teton and Yellowstone Parks.

It’s critical for grizzly bear management to see where pine bark beetles have not killed this extremely valuable, bear food source in the Greater Yellowstone-

Fortunately the evidence seems to be that their population around Yellowstone is still growing.

This is another story on the high grizzly mortality rate this year. Known bear deaths increase, but it’s no crisis. By Mike Stark. Billings Gazette.

. . . it’s official line that it’s no crisis unless it happens two years in a row. With the rapidly growing loss of whitebark pine, is there any reason to think next year will not be as bad?

The Greater Yellowstone brims with grizzly cubs this year

As posted some weeks ago, this was a fine year for the whitebark pine nuts in the Greater Yellowstone area. So was last year, and one result is a lot of grizzly bear cubs born and survived.

The article above and Rocky Barker’s blog both briefly discuss the sow with 4 cubs story we have been following most of the summer. Apparently wolves were a factor in the adoption of the cub.