There has been a growing problem in central Oregon from wild pigs and now they are showing up in Idaho. This is a real threat to the ecology of Idaho and should be taken very seriously by the Idaho Fish and Game.

Anatomy of a medusahead invasion

An annual grass worse than cheatgrass

Medusahead grass has the ability to take over a landscape like cheatgrass but nothing will eat it after it dies and dries out in the early summer months. It is becoming a huge problem in some areas and I’ve seen allotments with vast expanses where it is about the only thing that grows. Of course, if you’re the BLM, what else is there to do but renew the grazing permit and continue the degradation?

Why Are Asian Carp So Fearsome?

Why doesn’t Wildlife Services get a job killing these rather than our native wildlife?

Instead we have the U.S. Army Corps of Engineers doing nothing to stop their spread to the Great Lakes.

Why Are Asian Carp So Fearsome? By Karen Rowan. LiveScience.com as reported in Yahoo News.

Mountain goats may compete with the struggling native bighorn sheep

Grand Teton National Park officials are worried that mountain goats may increase in the Park and compete with bighorn sheep. The goats were introduced into the Snake River Range by the Idaho Department of Fish and Game and they have spread to the Teton Range. According to biologists there is no evidence that mountain goats inhabited the Greater Yellowstone Ecosystem.

Introductions of rainbow trout have caused the extinction of many species and are one of the primary reasons that inland sub-species of cutthroat in the western US have declined, or in some cases become entirely extinct. 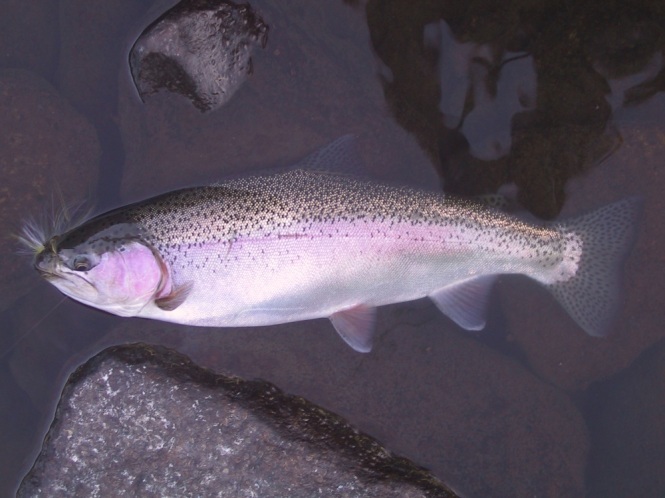 The Yellowfin, Waha Lake, and Alvord cutthroats, of Colarado Idaho, and Oregon respectively, have entirely disappeared due to the introduction of non-native rainbows which have hybridized them out of existence. Some subspecies only occupy tiny portions of their historic range for the same reason.

Brook trout in the eastern US are being displaced by rainbows in some places because they can inhabit warmer waters.

There are, however, the westslope and coastal cutthroat sub-species which co-exist naturally with rainbows.

Rainbows consist of several sup-species and are native to the rivers and lakes which flow into the Pacific Ocean from Russia to Mexico. They also inhabit some inland closed basins in California and Oregon where they became established when a stream or river changed course through a process called headwater transfer or when a river’s flow was insufficient to fill the basin and flow into the neighboring one.

END_OF_DOCUMENT_TOKEN_TO_BE_REPLACED

The only native trout in Yellowstone National Park are Yellowstone and Westslope Cutthroat, and Arctic Grayling. Over the years those species have been reduced in population due to competition, predation, and hybridization due to other introduced trout.

Lake trout, brown trout, and rainbow trout have become well established throughout the Park and now the Park Service is developing a Native Fish Conservation Plan which they hope will reduce their numbers and increase the numbers of native cutthroat and grayling. Right now the plan is in the scoping phase so you can find out more about it here: Native Fish Conservation Plan/EA Project Home Page

This could be very bad news for the Great Lakes

The U.S. Supreme Court has decided not to allow Michigan’s request to close a lock which would keep Asian carp from entering the Great Lakes. The whole case has not been decided yet so there may still be hope.

These are the fish seen in YouTube videos leaping out of the water when disturbed by boats. Water skiers have been injured by them and they are rapidly taking over waterways in the midwest.

Fish and wildlife officials will poison a 6-mile stretch of water near Chicago on Wednesday in a last-ditch effort to keep one of the most dangerous invasive species of fish, the Asian carp, out of the Great Lakes.

Unfortunate side effect to poisoning effort was the loss of 43 bald eagles and many other birds.

Besides making a few errors like saying that there were 3,000 buffalo killed last year rather than 1,700, and describing where the genetically pure buffalo are, this article is interesting and discusses some important issues which apply to a broader landscape.

This method of hunting is rather difficult to enforce.

“You’re not going to have some bubba up there going, `Pass me a beer and ammo’ and hunting some hogs,” the legislator said. “We certainly want to do it right.”

Many are concerned that the temptation to shoot other animals by some who might engage in this “sport” might be hard to resist. It would be out of the reach of most people because of the expense involved to operate the helicopter.

Wild pigs are not native to North America, they were brought to Texas by Spanish explorers some 300 or more years ago. There have been issues with a more virulent form of brucellosis found in pigs, Brucella suis, which is a potential bioweapon. This is why Brucella abortis is classified as a potential bioweapon and the reason why the Department of Homeland Security escorts bison to slaughter.

Wild hogs also cause a lot of resource and crop damage and as many know, most of Texas is private property with little public hunting opportunity.  There are numerous other non-native species in Texas which were brought in for the pleasure of hunters.

Addition  by Ralph Maughan on Feb. 23-

Ken C. posted this article. I want to add that I think folks might notice that feral hogs harbor the most dangerous kind of brucellosis. Where are the livestock associations that bemoan the brucellosis in Yellowstone area elk and bison?