When I heard about the Interior Department’s decision to reverse the changes that the Bush Administration made to the policy on wild lands protection I was pleased. However, I remain skeptical at how the policy will be implemented by the current bunch running BLM who I don’t really trust. There is no doubt, however, how Idaho Governor Butch Otter feels about it.

The new policy reverses what the Bush Administration changed and allows the BLM inventory its lands to determine whether they meet the criteria for wilderness. The BLM would then go through a public process whereby lands could be designated as “wild lands”.

For Butch, and his buddies, complete domination over the landscape is not enough. It is unacceptable that anyone, other than the chosen few who maintain control, have any say in how the public’s landscapes are managed. It seems as if their motto is “one cow, one vote”.

One of the problems with Christopher Columbus style ranching. 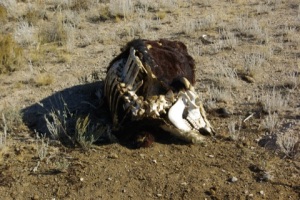 You put them out in the spring then “discover” them in the winter.

Poor animal husbandry in remote areas can lead to all kinds of problems for ranchers, cattle, wildlife, and habitat alike. It’s just one reason that these Great Basin desert areas are unsuitable for cattle grazing in the first place. It’s a desert and cattle grazing requires a huge amount of land just to support one cow. There often isn’t enough water for the cattle and the plants and landscape of the Great Basin did not evolve with large ungulates like bison or cattle so they are easily damaged by the presence of cattle.

Here, the ranchers are complaining about rustlers. This is probably a widespread problem throughout the arid West but, as you can see from the article, the ranchers are reporting sightings of wolves in the area. I’m sure that once any sighting is confirmed the hysteria will quickly focus on wolves rather than rustlers as a cause for their woes.

During a talk in Spokane, Washington given by the director of the Washington Fish and Wildlife Department about how budget cuts were affecting the department the subject of wolves came up and then things got ugly.

A response blurted out from the middle of the room:

“Why don’t we shoot some legislators?” a man said. 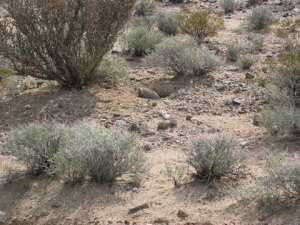 Female desert tortoise resting on the apron of her burrow about to get a power plant built on her doorstep. (2010) © Michael J. Connor

For several months we’ve been covering the progress of the, now approved, solar power plant at Ivanpah near Las Vegas on the California side of the Nevada/California border. Initial construction has begun and biologists have rounded up as many desert tortoises as they can to prepare the site for what essentially amounts to sterilization. In past studies where desert tortoises had been moved, half of them died while an equal number of tortoises at the site where they were moved to were subsequently displaced and died.

The energy company BrightSource Energy says that they want to mitigate the loss of the desert tortoise by restoring Castle Mountain Venture land and mining claims in an area to the north and add them to the Mojave National Preserve. This is all well and good but the lands are very poor desert tortoise habitat and would not compensate for the habitat lost due to the destruction that the new solar plant will cause.

It’s hard to call a project like this “green” when there is no corresponding reduction in greenhouse gas emitting coal or natural gas power plants and when the habitat destruction being caused further imperils the endangered desert tortoise and other species. This project keeps power generation in the hands of big corporations at the expense of taxpayers who would benefit more from subsidized use of less environmentally damaging rooftop solar.

One article, by the solar industry news site Solar Novus Today, about the lawsuit editorializes about the solar plant this way:

“One begins to wonder, aren’t we all on the same side? One of the main purposes of renewable energy is to protect the environment and help halt global warming. True, making money is a prime desire as well but if it wipes out the environmental concerns, we have, so to speak, thrown the baby out with the bathwater. Do we really need to put solar plants on pristine desert landscapes or on Native American sacred sites? It may take more time, effort and a little more money to research other less obvious sites, such as brownfields, but solar plants in these locations will accomplish both goals: keeping the environment safe and making money.”