Result might be due to change in hunting rules- 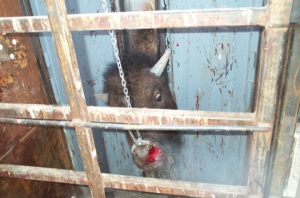 Articles about how the perennial saga of hazing, capturing, slaughtering, and hunting bison is starting once again in and around Yellowstone National Park. There is one change this year though that has left me scratching my head. This is the first year where bison leaving Yellowstone from the northern entrance of the Park near Gardiner, Montana are going to be allowed to use the Church Universal and Triumphant’s (CUT) Royal Teton Ranch (RTR) under an agreement with the National Park Service, Montana Department of Fish Wildlife and Parks, Greater Yellowstone Coalition, National Parks Conservation Association, and National Wildlife Federation.

The $3.3 million deal would initially allow 25 bison to use the RTR but only after they have been captured in the Stephens Creek capture facility just inside the Park boundary. They then would be subjected to squeeze chutes where they would have blood samples, fecal samples, taken from them and pregnant females would have vaginal transmitters placed in them so that biologists would be informed of the location where they give birth. Over time the deal might eventually allow up to 100 untested bison each year.

END_OF_DOCUMENT_TOKEN_TO_BE_REPLACED

Kathie Lynch is now perhaps the only person writing publicly the details of the Yellowstone Park wolves.  With more change than continuity in the last year, her most recent report takes us into the wolf world of the Blacktails, Lamars, Agates, Canyon, and even a bit of Mollies and the Quadrant packs.  Ralph Maughan

While finding wolves was sometimes challenging, fox watching was incredible. In the past, the hardest part of achieving a “Three Dog Day” (seeing a wolf, coyote and fox) was finding a fox. This time, foxes were everywhere.

The star of the show was a rare dark phase red fox, which looked almost black and is sometimes called a cross fox. It delighted everyone in the Lamar Valley with its careful listening for voles under the snow and head-first dives.

With only three wolf packs (Blacktail, Lamar, and Agate) as likely wolf watching possibilities in the Northern Range, I felt lucky to see wolves almost every day of my two week stay. One day I saw no wolves and one day we could only find one–a sleeping one, at that! Another day, dawn to dusk effort on the part of devoted wolf watchers only produced two black ears behind a bush. END_OF_DOCUMENT_TOKEN_TO_BE_REPLACED