“Outfitter set-asides” on the line. Will the average hunter benefit?

Is it a fairness issue? Will it serve to improve public access? Will it hurt or help the economy?

There has already been some discussion of I-161 here in this forum.

Is I-161 good for the future of hunting or just bad for business? By Michael Babcock. Great Falls Tribune. 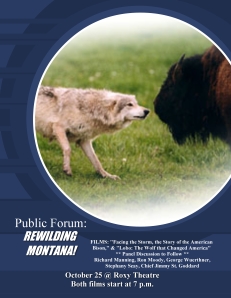 It never fails. Every time I find myself driving across the immense open space and undulating landscape of the front range in Montana, I puzzle myself over the absence of bison. And each time I hear about the threat posed to livestock by wolves, I wonder how different it would be if bison were out there. Just today, I was speaking to Chief Jimmy St. Goddard of the Blackfeet Nation about restoring balance to nature (versus plopping species down onto landscapes), and he stated “wolves will go where the bison are.” Humans, being lazy by nature, tend to think that given the choice between cows and bison, wolves would favor the slow, dumb ones. But we’ve never given them that choice. Since wolves co-evolved with bison, I tend to think Chief Jimmy knows what he is talking about.

Last year, WWP’s Montana office premiered “Lords of Nature” in Montana, a film documenting the importance of top predators like wolves to healthy ecosystems. Scientists were surprised to learn after reintroducing wolves into Yellowstone that there was a dramatic improvement in riparian ecosystems, benefitting fish and birds and creating a cascading beneficial effect on the food chain. Then we had a lively panel discussion that included Montana Wolf Coordinator Carolyn Syme. In arguing for management authority in federal court, Montana emphasized how “all species fit together”, with the wolf being an “integral part” of the ecosystem. But when asked why bison should not then be welcomed back to Montana, Syme refused to answer, pretending the question was a matter of opinion, not science.