In April, Ralph contrasted the disproportionate media hysteria that takes place when a wolf kills a cow or sheep versus when any number of other natural events result in vastly more significant livestock loss.  The example that he used :

cattle losses to wolves in Montana in 2008 totaled just 77 dead with a couple dozen more “probables.”

Another more recent example of the glaring disparity of livestock loss to wolves & environment versus the weather is aptly illustrated on the other end of the weather spectrum :

In southeastern Nebraska’s Hamilton County, temperatures in the 90s and high humidity contributed to the deaths of roughly 600 cattle.

The U.S. Fish and Wildlife Service dubs the plan an “eradication program”. 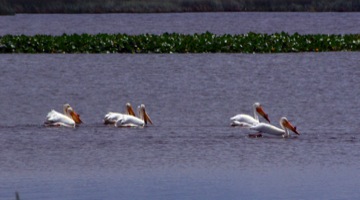 The plan to kill pelicans by shooting or covering their eggs with oil to protect Yellowstone cutthroat trout in Blackfoot Reservoir has been rejected by the U.S. Fish and Wildlife Service due to the requirements of the Migratory Bird Treaty Act.

Idaho F&G plan to kill pelicans hits obstacles. Associated Press. By John Miller. This is a much longer story than the one originally posted. 7/2/2009

We wrote about this story earlier here:
Rare pelicans to be “managed” (killed) in Idaho

This has long been a major polluter of the air and water of the 4-Corners country of the southwest.