Mourning the Loss of Our Friends

In this issue:
* Update from the Field – Four Bulls Killed by Agents
* Our Friend Frog: BFC Celebrates His Life, Mourns His Passing
* Last Words
* Kill Tally

END_OF_DOCUMENT_TOKEN_TO_BE_REPLACED

Destruction of archelogical valuable artifacts is a well known practice in Southern Utah. Time for a federal crackdown was way past, and finally a well planned raid was carried, arresting 23 local scoffaws.

Senators Hatch and Bennent are busy fanning the flames at a time when death theats as well as real shootings by the wingnuts have become all too common.

Misinformation Has Contributed to the Severe Declines in Some Bighorn Sheep Populations. 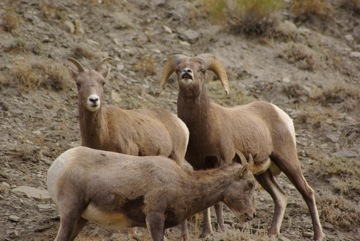 The Wild Sheep Foundation, for many years, has been raffling off a sheep hunting tag which often times generates more than $100,000 that is partially used to fund research conducted at the Caine Veterinary Teaching Center. According to an article in the Lewiston Morning Tribune (subscription only) they are questioning whether will continue to conduct the raffle thus impacting funding of the Center.

Misinformation Has Attributed to the Severe Declines in Some Bighorn Sheep Populations.
Neil Thagard : June 15th 2009

An article also appeared from the Associated Press last night detailing the voluntary leave that Dr. Marie Bulgin has been placed under.

Posted in Bighorn sheep, domestic sheep, politics. Tags: domestic and bighorn sheep, Idaho. Comments Off on Misinformation Has Contributed to the Severe Declines in Some Bighorn Sheep Populations.

Fish advocates applauded a federal judge’s decision yesterday to protect native steelhead trout in the John Day River basin. The court order temporarily halts cattle grazing within important native trout streams in eastern Oregon’s Malheur National Forest. This latest round of the decade-long litigation targets, as the court put it, “repeated failures” by the Forest Service to address grazing impacts to fish habitat. The steelhead, an iconic Pacific Northwest native trout, is listed under the Endangered Species Act as a “threatened” species in danger of extinction.

Grazing has badly damaged stream and riparian habitats along more than 230 miles of streams, according to evidence gathered by ONDA and the Forest Service. END_OF_DOCUMENT_TOKEN_TO_BE_REPLACED