Brian Ertz posted a related article about this on May 21.

“As Chairman of this Committee, I am forced to conclude that not only has the endangered species program been sorely politicized, but effort after effort supposedly designed to correct the mishandling of the program by this Administration and its agencies has also been badly bungled. At this point, the best hope for endangered species may simply be to cling to life until after January when this President and his cronies, at long last, hit the unemployment line. . . .: Chairman Nick Rahill.

Rest of the story from the House Natural Resources Committee. 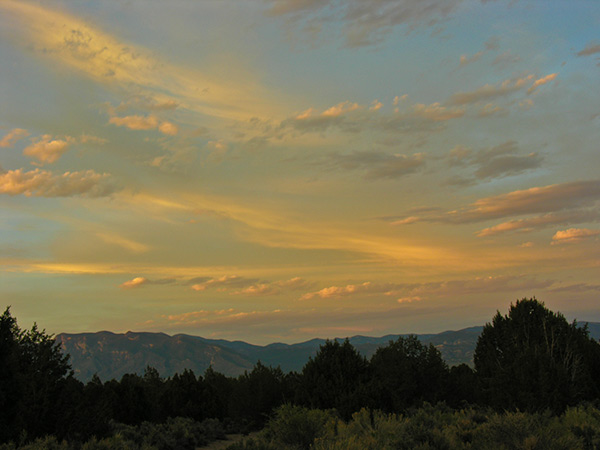 From the sign that says “next services 98 miles,” drive down U.S. 93. After 30 miles turn off onto a graded dirt road and go 15 miles, then 4 miles on “a way.” You are at the Fortification Range, a little known, recently designated Wilderness area with elk, deer and wild horses. This was taken on May 18. The mountains in view are actually the Snake Range. I love that unpopulated Nevada open backcountry.

Instead Idaho Fish and Game Commission has started to play number games. You may have read yesterday that there are 1000 wolves in Idaho. They are counting estimated pups just born. This has never been done before and every biologist knows the valid wolf population is that at the end of the year because many pups do not survive. Pup survival rate in Yellowstone has been as low as 30%.

Idaho Fish and Game’s wolf hunt rules issued yesterday are based on a continued 21% growth rate in the wolf population. Here, once again, they are in violation of the delisting rules — wolf population counts at the wrong time of the year.

Here is the news release from the Idaho Fish and Game Commission on their wolf hunt decision.

Notice that they could start their second year of “wolf management” on Jan. 1 by merely extending the wolf hunt season and reduce their newly lowered population minimum, even further.

The Idaho Fish and Game Commission Thursday, May 22, adopted the first regulated hunting season on gray wolves in the state’s history

The commission, during its May meeting, set a wolf population goal of 518 wolves, and adopted hunting seasons, limits and rules for the 2008 hunting season.

The season would be open from September 15 in the backcountry and from October 1 in all remaining areas and run through December 31. The commission would review results in November to consider extending the season if limits are not being met.

A hunter can kill one wolf with a valid 2008 hunting license and wolf tag.

“I think we made history today,” Fish and Game Director Cal Groen said. “We must manage this species; they are well beyond recovered.”

The wolf hunt rules are based on the Idaho Wolf Population Management Plan, approved by commissioners in an early March meeting. The gray wolf in the Northern Rocky Mountains was removed from the endangered species list in late March. The plan calls for managing wolves at a population level of between 2005-2007 levels (518-732) wolves for the first five years following delisting.

The estimated population at the end of 2007 was 732 wolves, with an estimated 20 to 30 percent annual growth rate. Adding this years expected pups, that number would be more than 1,000 wolves before hunting season would start.

Commissioners adopted a wolf population goal of the level from 2005, which was about 518 wolves.

Fish and Game rules call for a total statewide mortality limit, including harvest from the Nez Perce Tribe, of about 428 wolves in 2008, which includes all reported wolf kills – from natural causes, accidents, wolf predation control actions and hunter kills. If the limit is reached it would result in an estimated end-of-year population of fewer than 550 wolves.

Hunting will be managed in 12 zones. Hunting intensity would vary with levels of conflict between wolves and livestock or game animals. But when the statewide mortality limit is reached, all hunting would stop. When limits in individual zones are reached, hunting in those zones would stop.

Additional rules include a mandatory report within 72 hours and check-in within 10 days of killing a wolf, and no trapping, electronic devices, bait or dogs will be allowed in the first year. Weapons restrictions are the same as for deer.

Fish and Game expects to release season and rules brochures to the public in July.